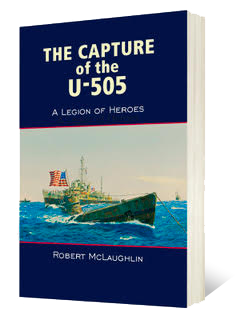 The capture of the German U-505 was one of the most extraordinary stories to emerge from the Battle of the Atlantic in WW II. The U-505 was the first enemy man-of-war to be captured on the high seas since the capture of the British brig, HMS Nautilus, in the War of 1812. The book follows Captain Daniel V. Gallery, USN, a Naval Aviator and master of Anti - Submarine Warfare, in his commands of PBY Squadrons VP-73, VP-84 and Hunter Killer Task Group (HKTG) 22.3, who is determined to capture a German U-Boat on the surface and salvage the intelligence prizes. The author follows the German submarine, the U-505, through the ordeals of Hans Göebeler, a German seaman who sailed on all nine combat patrols of the U-505. The U-505 was forced to the surface by HKTG 22.3 on June 4,1944 and captured. The Capture of the U-505 - A Legion of Heroes is a tribute to the courageous heroes, civilian and military, men and women who employed ingenious methods to counter enemy intelligence and tactics and who exhibited amazing bravery in risking their lives to defeat the enemies of the free world during the Battle of the Atlantic. In researching the story, the author found himself walking in the footsteps of heroes and fell to the rear of an expanding column of heroic men and women and that column eventually evolved into a Legion of Heroes who are portrayed throughout the book.